Expectations in 2019 from Android for Automotive Infotainment Systems

2018 was an eventful year for Android Automotive in many ways. A large set of OEMs announced plans to deploy Infotainment Systems powered by Android with Google Maps, Play and Assistant in vehicles manufactured from 2021 onwards. Google also announced partnerships with Volvo and Audi to make Android available for vehicles as early as 2019.

Android Automotive must not be confused with Android Auto, which is a smartphone mirroring technology. The former is an embedded operating system designed to bring rich and secure user experiences that are currently available only outside the vehicle i.e. on a smart phone or tablet. While, Android-based infotainment systems or tablets have been present for some time now, these ‘vanilla’ systems don’t provide access to some important applications such as Google Maps, Play store, Assistant and even over-the-air framework for security/feature updates.

Android Automotive has come a long way since it was first demonstrated at CES 2016 running infotainment system on a Maserati Ghibli. The below figure provides a snapshot of the important features enabled on Android Automotive since its introduction and what we can expect from Android Q to be launched in 2019. 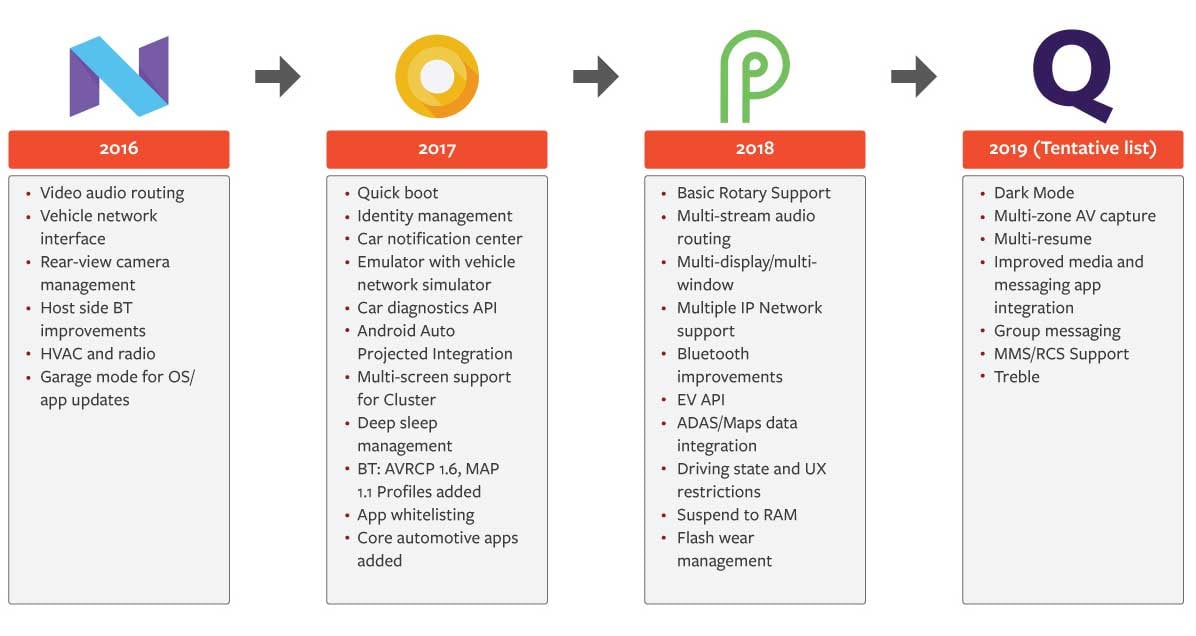 We can also expect Google to integrate more cloud-based or HTML-based applications in coming years to minimize the performance impact on infotainment systems, thereby potentially also targeting the entry-level vehicle segment that is still largely untapped. Android Auto apps could come bundled in the operating system itself that have been traditionally limited to the luxury segment. Overall, we envision a Cloud era where applications and services would dictate operating system feature changes, where embedded controllers get replaced by complex computing systems that are capable of handling multiple apps at the same time; gesture/speech/emotions powered by AI replace the traditional touch based interfaces.

Sasken has been fortunate to have contributed in bringing-up the first Android Automotive concept by Google and in productizing one of the first ‘vanilla’ Android-based Infotainment systems for a European Auto Tier-1 way back in 2013. Sasken is closely working with leading semiconductor partners and Google to bring new features and enhancements to Android Automotive.

Details of Android Automotive revealed as the OS nears launch

Want To Know More About This Topic?